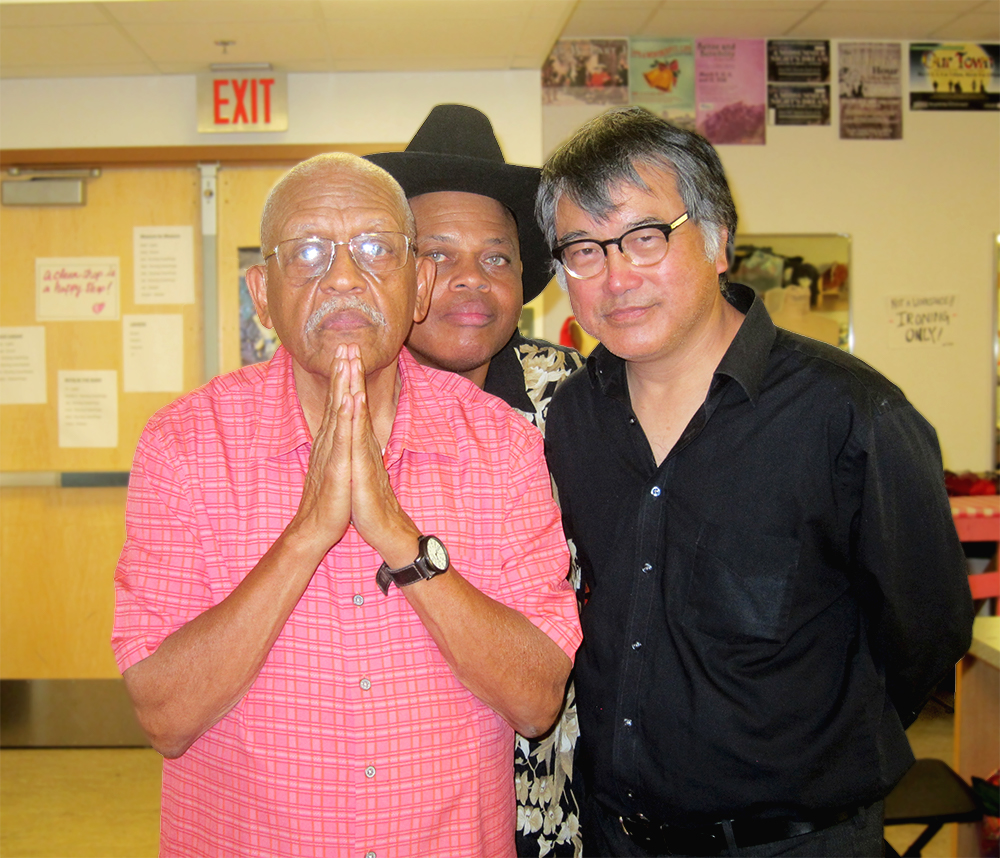 PURPLE GUMS is a brass ensemble (reeds, cornet and tuba) whose role is to carry on the tradition of making music in the moment. Charts don’t exist. Rehearsals have never occurred. Ideas are generated and developed on the bandstand. Music making for this group is a high-risk venture. The music created from the pooled experience of the band’s members is a tasty gumbo of jazz, free improvisation, ragtime, classical and spoken word. This leads to flights of whimsy and excursions into the unexpected. What you see is not always what you get. While you may think for a moment that you are listening to a traditional New Orleans brass band, what you are caressed with may be something all together different – a tight improvised counterpoint or a gospel-inspired vocalization.

Bobby Bradford, born in 1937, is the venerable elder and solid rock on which the ensemble stands. Bobby is a virtuosic cornet/trumpet player, composer and educator. He has played in and led ensembles with some of the greatest artists in improvised music, including Leo Wright, Buster Smith, John Hardee, Ornette Coleman, Eric Dolphy, David Murray, Charlie Haden and John Stevens. With long-time collaborator John Carter, he formed the New Art Jazz Ensemble with John Carter and was a member of the Little Big Horn workshop with Carter, Arthur Blythe, James Newton, and other free-jazz musicians. Bobby continues to lead his long-standing ensemble Mo’tet and a newer one call Tete-A-Tete. He taught for many years at Pasadena City College and continues to teach at Pomona College.

Francis Wong, a prolific recording artist, is featured on more than forty titles as a leader and sideman. For over two decades he has performed his innovative brand of jazz and creative music for audiences in North America, Asia, and Europe with such luminaries as Jon Jang, Tatsu Aoki, Genny Lim, William Roper, Bobby Bradford, John Tchicai, James Newton, Joseph Jarman, Don Moye and the late Glenn Horiuchi. Wong’s imaginative career straddles roles as varied as performing artist, youth mentor, composer, artistic director, community activist, non-profit organization manager, consultant, music producer, and academic lecturer. Key vehicles for his work are Asian Improv aRts, the company he co-founded with Jon Jang and as a Senior Fellow at the Wildflowers Institute. In addition, Wong was a California Arts Council Artist in Residence from 1992 through 1998, and a Meet The Composer New Resident in 2000-2003. In 2000-2001 he was a Rockefeller Next Generation Leadership Fellow. He has also been a guest member of the faculty at San Francisco State University (1996-98) and at University of California at Santa Cruz (1996-2001). He is currently a lecturer in the Department of Asian Studies at San Francisco State University.

William Roper, is a multi-faceted artist working as a composer, performer on tuba, performance and visual artist. Tuba is his primary instrument. As a soloist he has performed in North & South America, Europe and Japan. Leading several of his own ensembles, he has released twelve recordings as a leader or co-leader. He has performed and recorded with an impressive range of artists and ensembles that include Anthony Braxton, Jimmy Cleveland, Douglas Ewart, Aluna George, Billy Higgins, Glenn Horiuchi, Elton John, Yusef Lateef, Thomas Mapfumo, James Newton, Leon Russell, Wadada Leo Smith, Horace Tapscott, John Williams, Hans Zimmer, the L.A. Philharmonic, L.A. Master Chorale and many others. He has fulfilled several commissions as a composer, with performances on three continents. Roper has been an artist in residence at institutions in California, Germany and Japan. He has received awards from the L.A. Dept. of Cultural Affairs, California Arts Council, NEA, Meet the Composer and others. In addition, as primary artist or collaborator, he has created works in dance, theatre, video and performance art. His visual art has been exhibited in the U.S. and Europe.